A viewer from Wisconsin recently wrote asking for advice on where to hunt in Missouri: “My three friends and I are planning a hunting trip to Missouri in November of 2020 as a change of pace from hunting in Wisconsin.  We’re looking to come down November 9th-13th. I was wondering if you’d be willing to share any thoughts on what phase of the rut we can expect during the 9th-13th.” 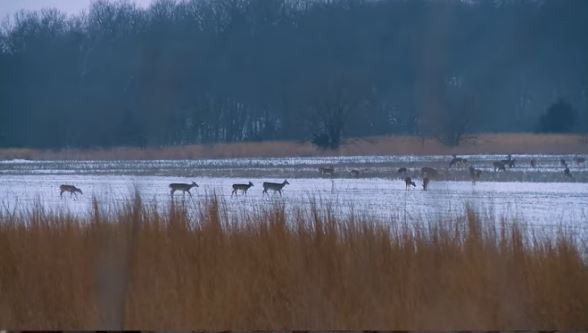 Grant’s advice for this hunter:

I suspect you’ll be hunting in northern, Missouri!  I live in the southwestern corner, near Branson in the Ozark Mountains. There are very few nonresident hunters in this area because the vast majority of habitat is composed of high graded forest. There’s no row crops anywhere near where I live and therefore few bottlenecks.  This type of habitat makes patterning and/or observing deer more difficult.

I work frequently in northern, MO.  If larger bucks are the goal, in general, the further north the better!  It’s better hunting (more fragmented habitat) and better soils!

The best rut behavior is usually around November 1st through the 8th + -.  This is because the majority of does become receptive somewhere close to the 8th annually.  Bucks move more distance and time daily during the late pre-rut than during any other time of year.  Once 30% or more does are receptive many bucks will be tending a doe and therefore not moving as much as when they were seeking.

With this said, any given day and location during November can be good or bad pending on if a receptive doe moves in front of where you are hunting.  The odds are better when more bucks are moving during daylight hours seeking receptive does. 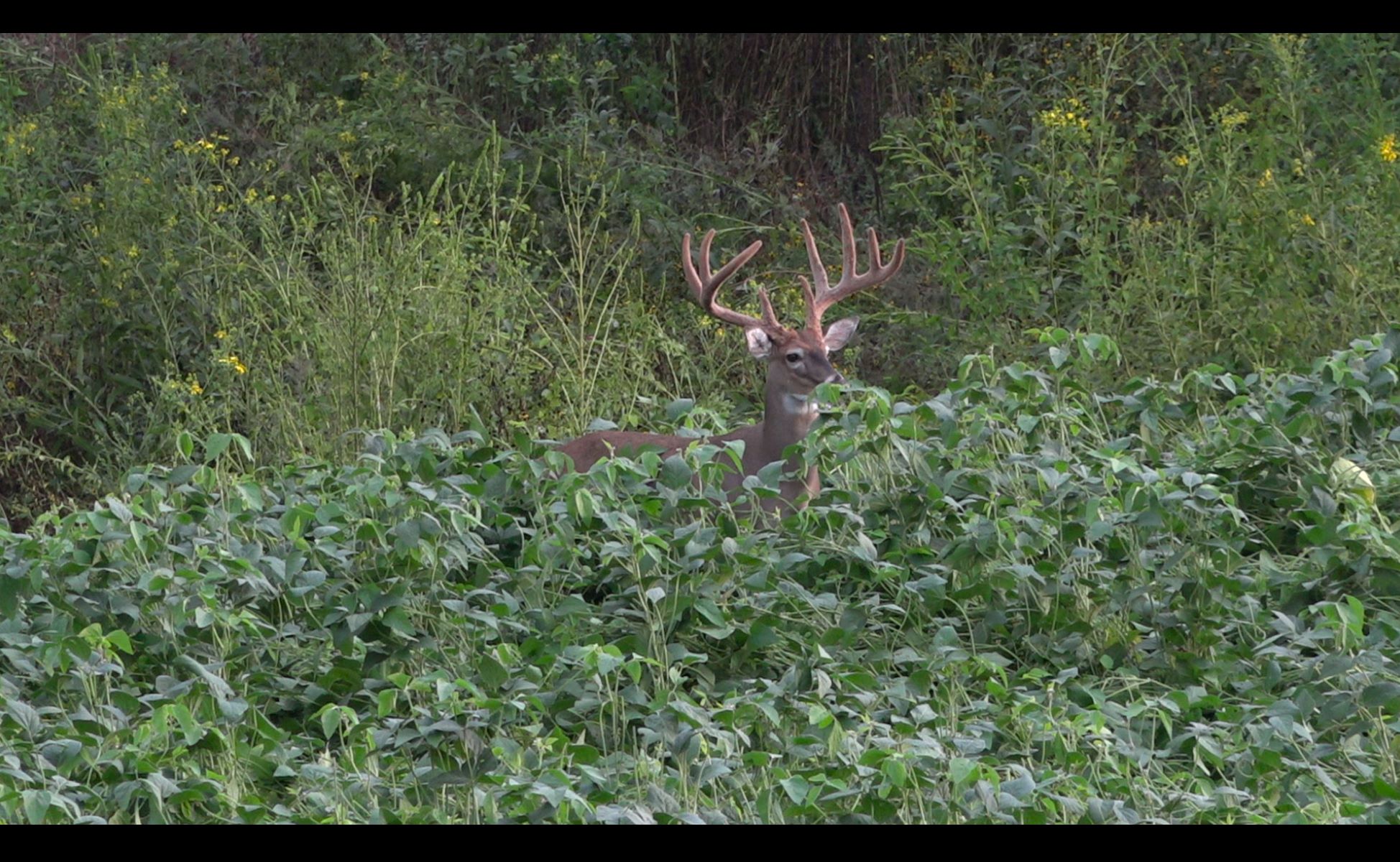 Last summer (August 26th), Clay filmed this buck named “Moose” at the Crabapple food plot of Eagle Seed Forage Soybeans. This was the last encounter we had of Moose during the summer. Moose then went MIA (Missing In Action).

Then recently while working a prescribed fire the crew found the remains of this big buck. It’s normal for our team to find deer that died over the winter when we’re in the woods post-season shed hunting, scouting for turkeys, doing prescribed fire and that kind of thing. Moose is one of several bucks we have found this year.  I don’t know if more bucks died than normal or we simply found more than normal. Fortunately we have excellent numbers of older age class bucks!

In this video from the field, Daniel shares more thoughts on finding this buck.

Recently Daniel traveled 2 hours northeast of The Proving Grounds to assist a landowner with his habitat and hunting improvement plan. This 50 acre property was primarily a hardwood timber which made it difficult to pattern and hunt deer, especially during years with high acorn production. 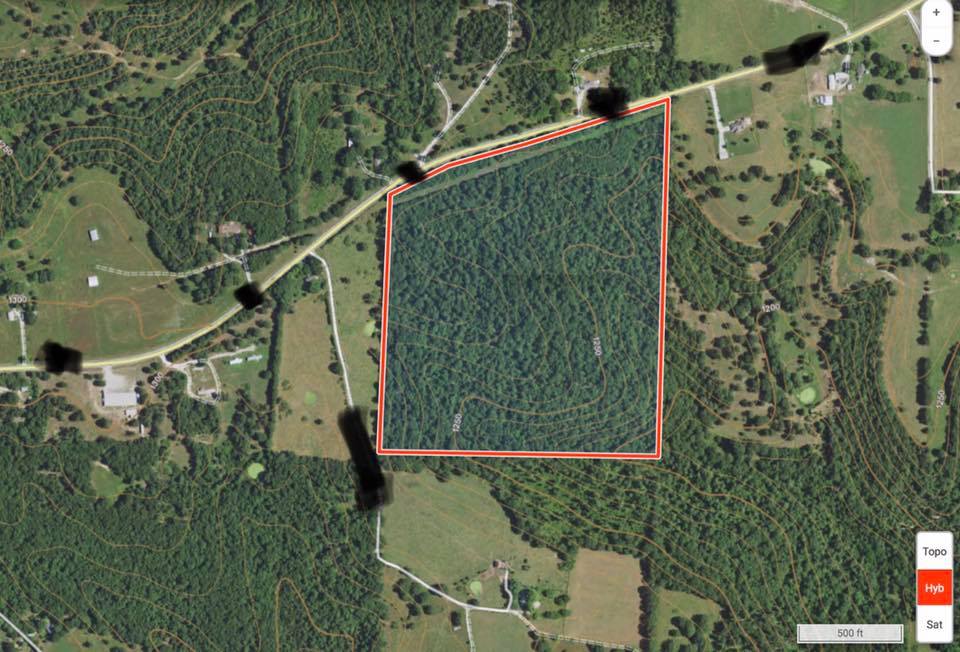 Daniel designed several food plots that would create multiple pinch points and hunting locations. This plan allows hunters to be able to hunt the food plots when deer are seeking forage there.

When deer are seeking acorns or moving through the property to reach a different destination, hunters can effectively hunt the pinch points around the edges of the plots. 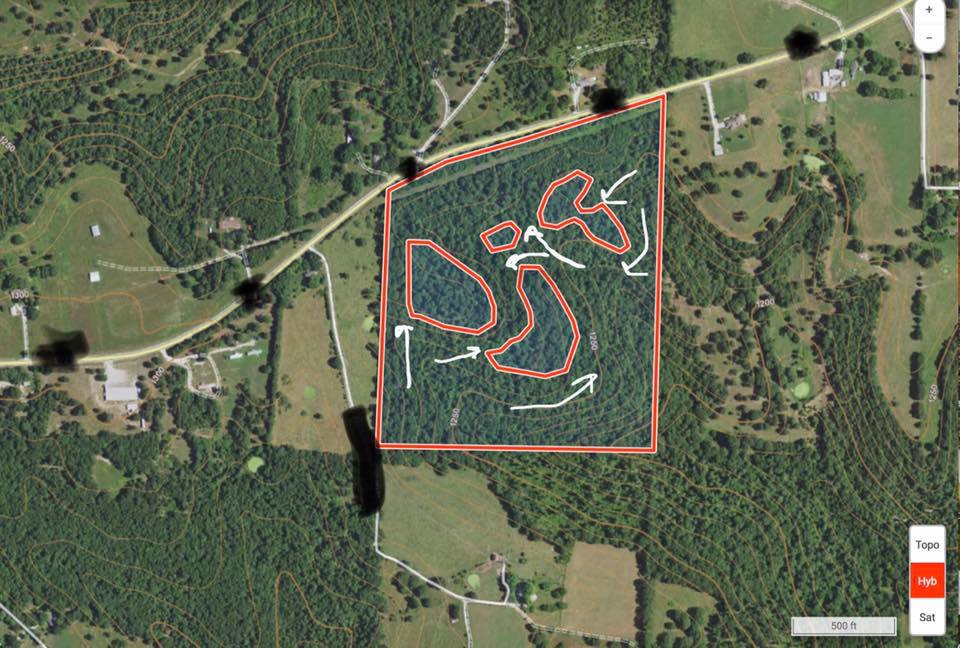 Daniel also laid out several walking paths, so the landowner can effectively enter, hunt and exit a hunting location without alerting deer.

Having multiple pinch points and access trails gives this landowner hunting locations for any wind direction. 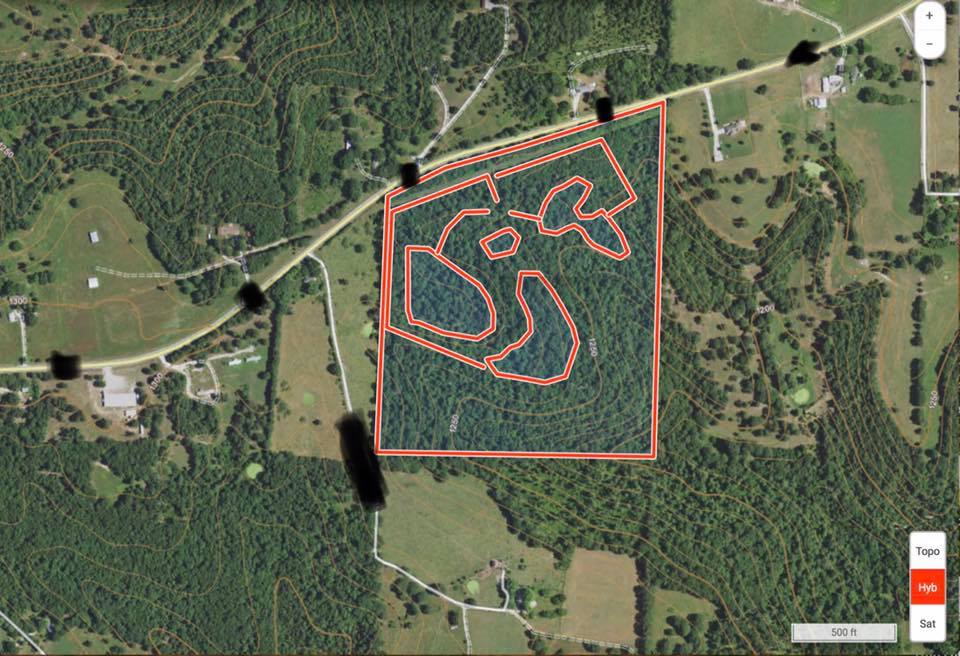 We look forward to hearing about the progress of this project and suspect this landowner and his family will enjoy many successful hunts!

We recently worked on a property in Northern Missouri. The landowner had portions of the property logged a few years ago. Critters are spending lots of time in those areas, but there are several things we needed to change. We made several changes to the current management system, and will change the way timber is harvested from this property in the future! You can view this entire management plan on a future episode of GrowingDeer!

It may seem early, but we’re already keeping tabs on these toms! This interior road is often walked by toms during the spring, as they move up and down the ridge. This string of longbeards is keeping to the pattern of years past. Trail cameras are great tools for learning turkey movements (scouting) during the spring then hunting these patterns once the season opens!

It’s that time of the year! Antlers are hitting the ground but where should you start looking?

A great place to start searching is near food and cover.

Here at The Proving Grounds, the Fall Buffalo Blend is providing great late season forage for deer and we have found several sheds in food plots. Intern Nigel Waring recently found this nice shed in a plot while working in the field. 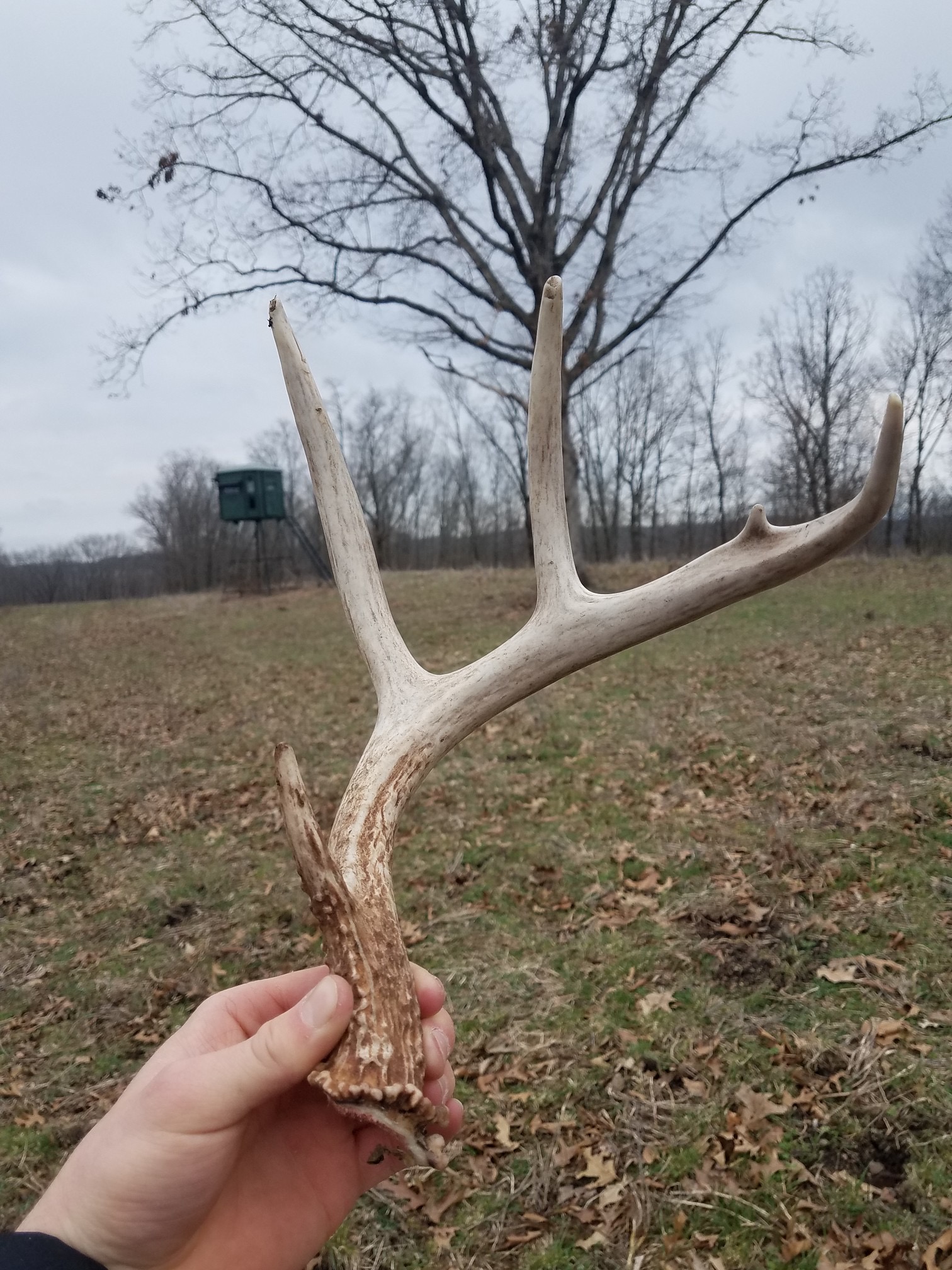 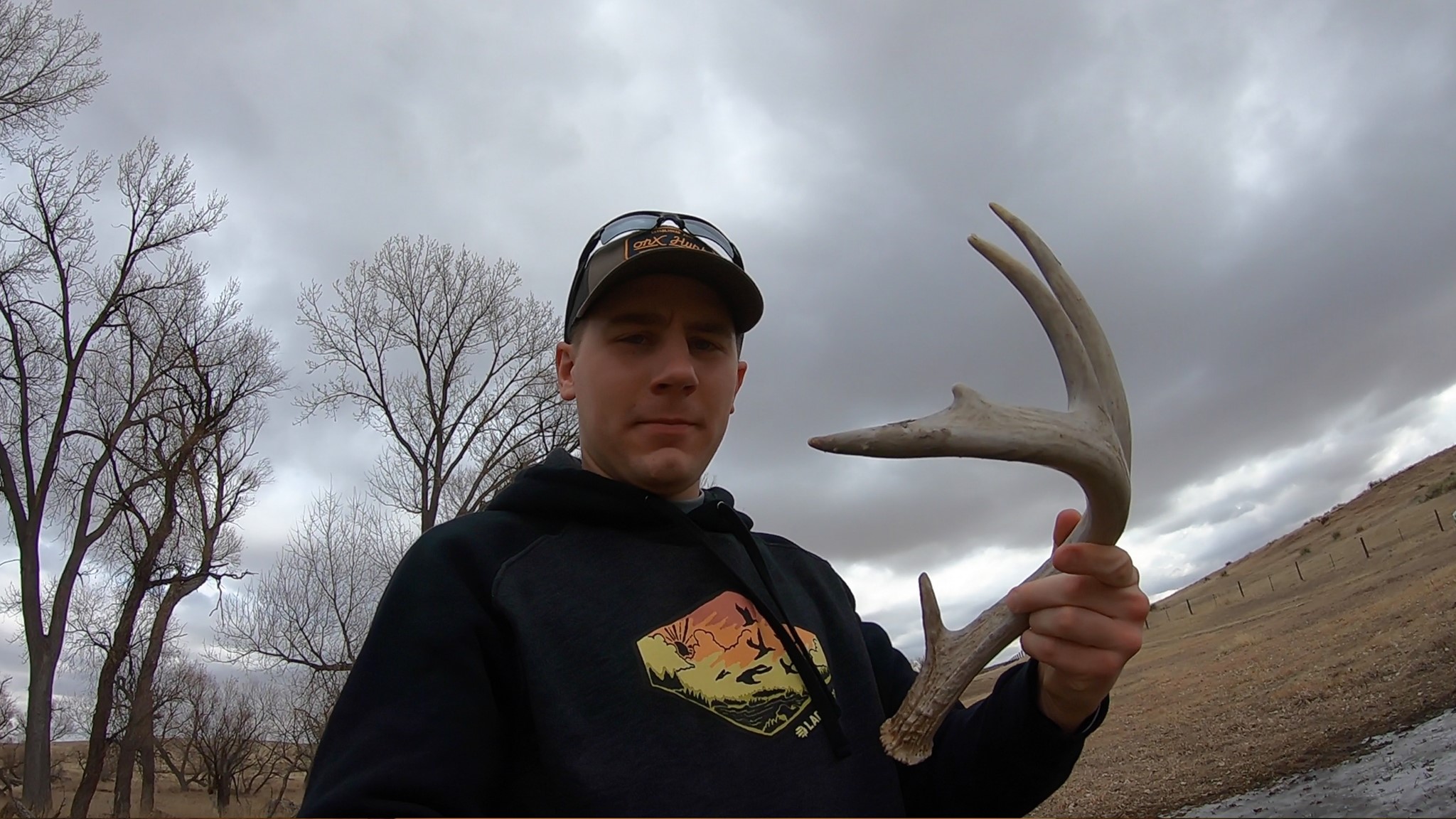 Tracy frequently has success hunting along known travel corridors and deer trails – especially when the trail is marked by a rub line! The antler below was found in just this scenario. 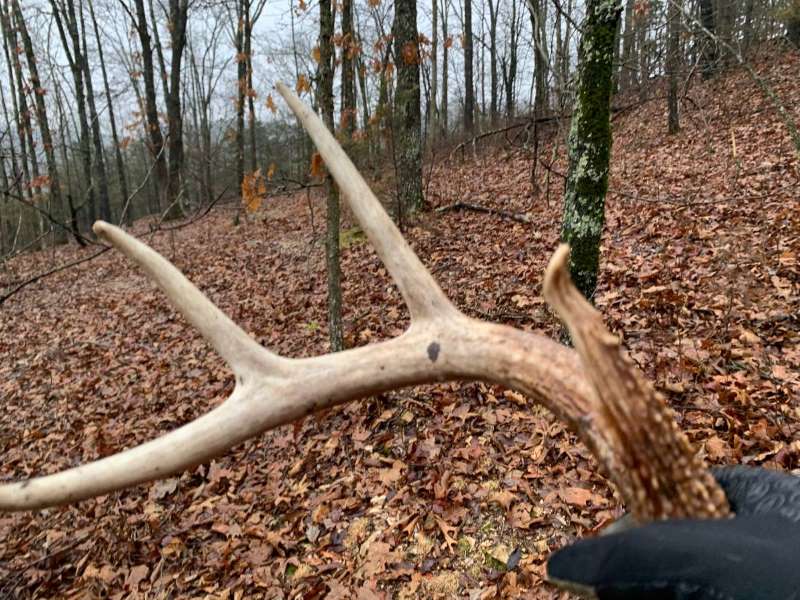 Deer trails marked with rubs leading to or in bedding areas are an especially good spot to slow down to search for antlers. The same trail where the above antler was found leads to a power line right-of-way.  There were deer beds throughout that area in the native grass. The antler below was found along a trail cutting through that area. 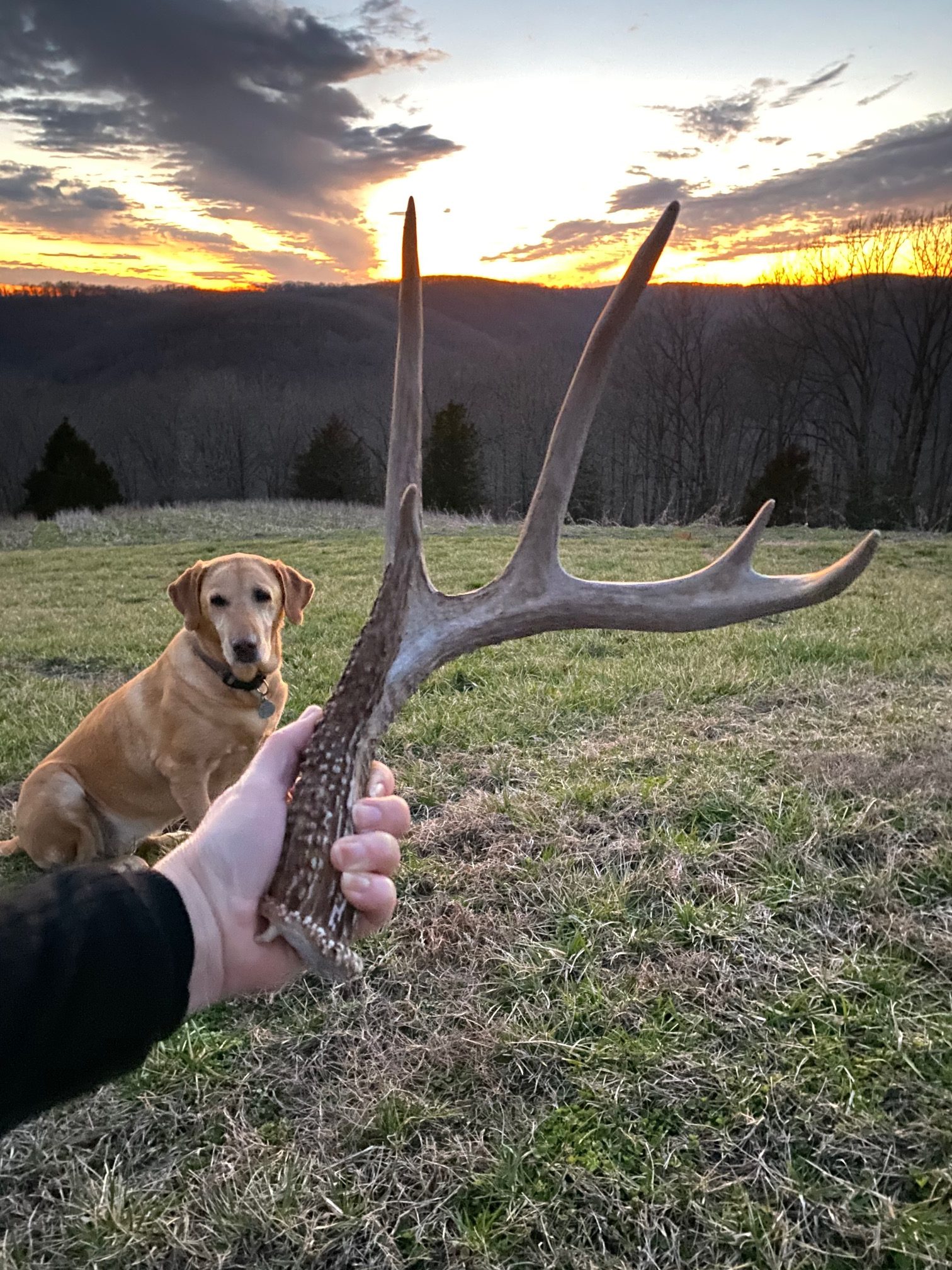 When in the searching in the timber for antlers, Tracy gives special attention when she finds an area where the deer have been bedding.  The below video shares one of the first finds for the 2020 shed hunting season that was near where deer had been bedding in the timber.

No matter where you shed hunt, identify the best resource in the area this time of the year and start hunting there. It maybe food, cover or both. These are the first places to start and can yield “easy” finds. The next place to look would be travel corridors between food and cover. 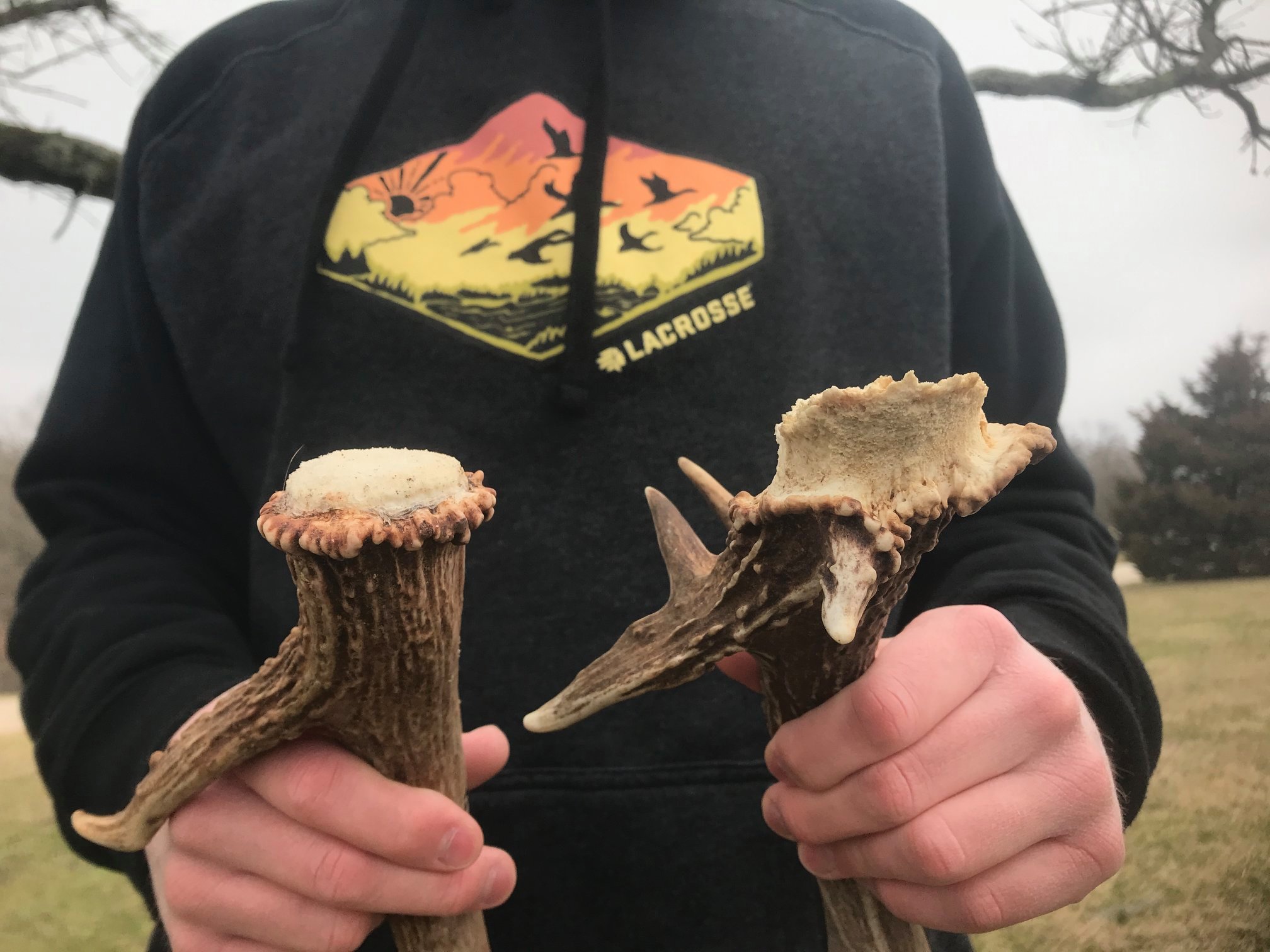 I recently received a question from a hunter that wondered why mature bucks weren’t staying on his property. He described his property as 168 acres in central Michigan. There are about 27 acres of corn each year and 6 different small ¼ to 2 acre sized plots planted in various food plot blends.

The property includes 70 acres of hardwoods, mostly maple, and not many oaks. There are lots of apple trees spread around the property. There is a sanctuary area of about 20 acres and there seems to be lots of resident does and fawns.

I shared with the him that buck home range size varies based on the quality of habitat and many other factors. Based on lots of research throughout the whitetail’s range it is common for bucks to have a home range of more than 640 acres (a square mile). 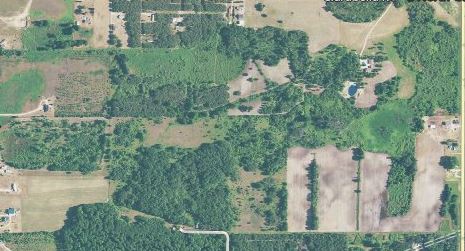 A very important consideration to determine why bucks may not be spending more time on the property is what resources are available there versus on the neighboring properties during the hunting season. This could be as simple as where standing corn is located and, just as importantly, where the hunting pressure is the lowest.  A 20-acre sanctuary equals 1/8th of the property. If deer have to run a gauntlet of hunting pressure to get to the sanctuary or human scent frequently blows through most of the sanctuary then deer will likely seek cover elsewhere.

So – if this property is in the middle of a heavily timbered area I suspect that food plots would be a major attraction – a limited resource. If the property is surrounded by similar habitat with ample quality forage readily available, then hunting pressure/security cover may be the most limiting factor and where bucks spend most of their time during daylight.