A friend from Michigan recently asked for help aging this buck. To accurately estimate deer age knowing the location and quality of habitat where the deer lives is helpful. It makes a big difference if the deer has been making a living eating soybeans or woody browse. 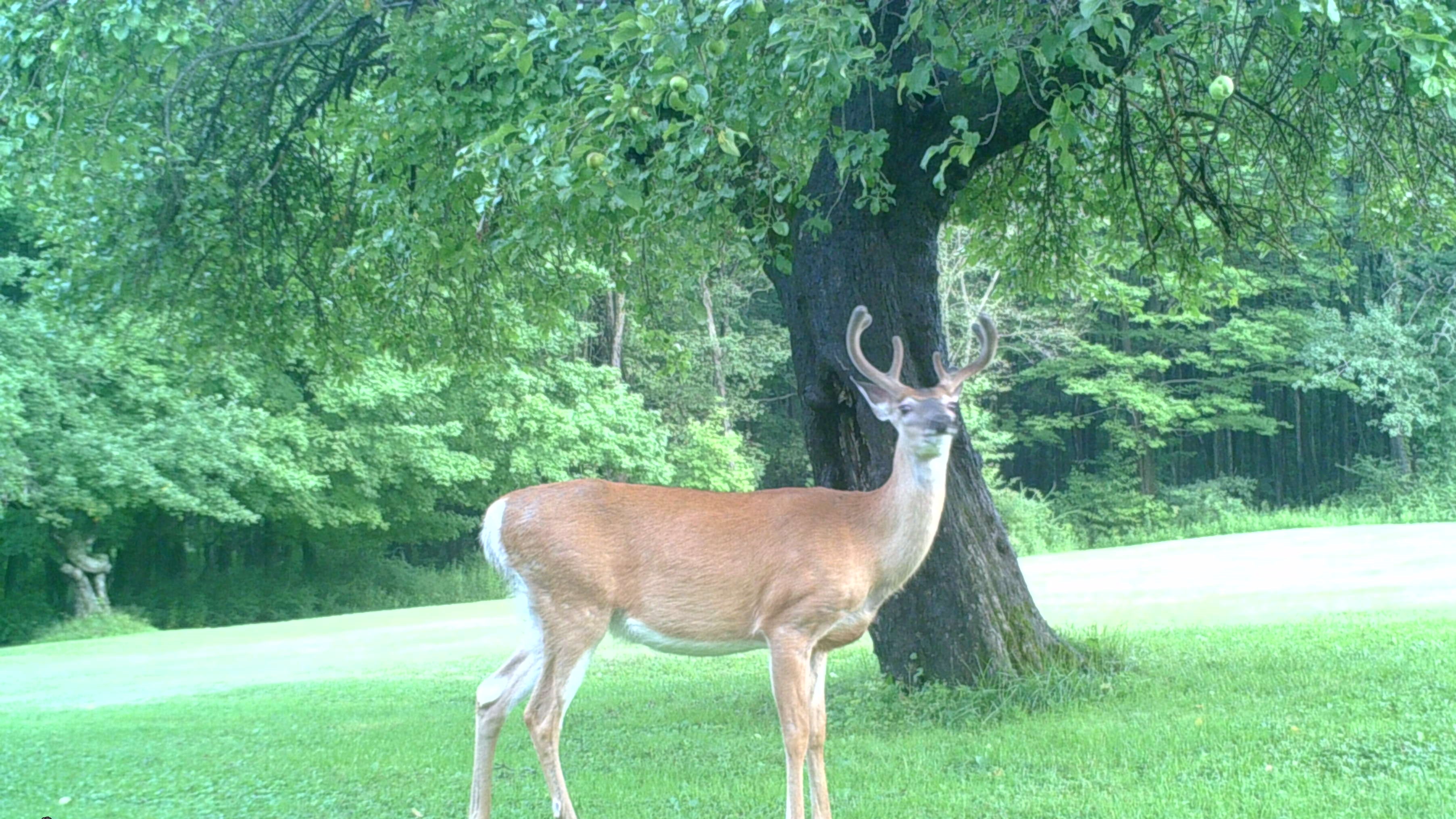 In general, this buck’s neck merges high on his chest – well above the brisket. His antler bases are relatively small and his shoulders and hams don’t appear to be fully developed. If this buck makes a living in timber habitat, I estimate he’s two. He could be a yearling if he’s been feeding on soybeans all summer.

My advice to deer hunters that wish to tag a mature buck and are faced with a quick shoot or pass decision is to focus on the buck’s chest. A mature buck’s chest will be developed and their body will have a buffalo shape. That is to say their chest will be larger than their ham. The buffalo shape is an accurate indicator that a buck is mature and is fairly easy to accurately assess in a shoot or pass hunting situation.

I was recently was asked, “What was the Creator thinking when He created ticks?”

I’ve often wondered this myself. Tick populations are increasing in the USA. Before European settlement there were large (75 mile wide) fires (either started by natural events or Native Americans) based on early explorer records. These fires likely significantly reduced tick populations (based on burning large cattle pastures in Oklahoma). These days a large prescribed fire in most places is 100 acres or less. As soon as vegetation grows in these areas deer and other herbivores forage there and ticks of various maturing stages drop of these critters. so the area is repopulated with ticks rapidly.

After a lot of thought and conversations with folks much smarter than me, I believe ticks were created to remove weak or diseased critters and their populations were kept in check by large wildfires. This is a theory based on what’s known and what I believe, as a biologist, seems plausible.

This time of year, I’m frequently asked what habitat improvement projects are most important. Most folks expect a standard answer such as “plant a food plot” or “create some bedding cover”. These projects may or may not be appropriate for your goals or where you hunt.

Which project or projects will produce the most benefits depends on your hunting goals and what the limited/missing resource is in the local habitat. For example, if where you hunt borders a creek, lake, or several ponds that don’t go dry, developing another water source won’t improve the quality of the habitat for deer and turkeys or help you pattern deer. Likewise, if there’s a large CRP field next to where you hunt, then cover isn’t limited and adding more wouldn’t attract deer and probably won’t make them easier to pattern. 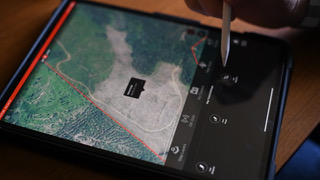 Before assisting folks with their habitat and hunting goals I start by using onX maps to study their property and the neighborhood. I also ask very detailed questions about their hunting style. These questions include how much they and others hunt the property. Understanding the amount of hunting pressure is a big factor when determining the amount of cover and the number of stands/blinds that allows the best opportunity of meeting their hunting objectives.

I also ask whether they primarily hunt with a gun or bow. Different habitat layouts are better for different weapons.

These are but a few considerations to address before spending valuable time and resources to improve the deer herd quality and hunting opportunities where you hunt.

Consistent winds seem to be rare throughout much of the whitetail’s range except in the far western portion of the plains states. Since I don’t get to hunt in western Kansas, eastern Colorado, etc., frequently I try to hang stands at the highest elevation where I’m hunting. Typically, the higher the elevation relative to the surrounding landscape the more consistent the wind will be.

Another strategy I use is to watch the weather then try to hunt the best days that my schedule allows. These may be just before a front when the wind is stronger (and more consistent), mornings during cold days (I hunt low elevation during those days as cold air sinks to the lowest elevation), or when the humidity level is low. (See this video on hunting thermals.)

I try not to hunt the best areas during days when the wind speed is forecast to be slow and the humidity level will be high. Moist air carries scent further than dry air.

I use a Scent Crusher to remove odor and store my clothes and gear and then use D/Code Field Spray while heading to the stand. This system has served the GrowingDeer Team well and the wind swirls frequently at The Proving Grounds. 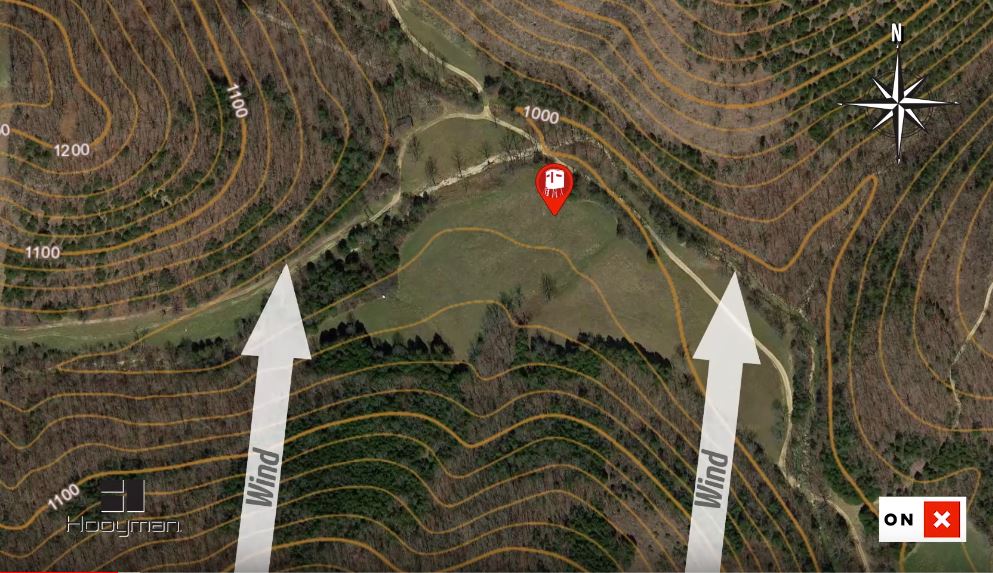 Finally, I prefer multiple stand and/or blind locations for each property. This allows the property to be hunted during most wind directions.

You might notice I didn’t focus on deer sign, etc. It’s important to be able to approach, hunt, and exit a stand or blind without alerting deer. Swirling winds make it difficult to remain on a stand or in a blind without alerting deer. This doesn’t mess up just one hunt. Deer have memory and may avoid an area where they detected danger for several days.

I use these principles whether hunting a piece of public land for the first time or where I live.

Enjoy Creation and let me know how your season goes! 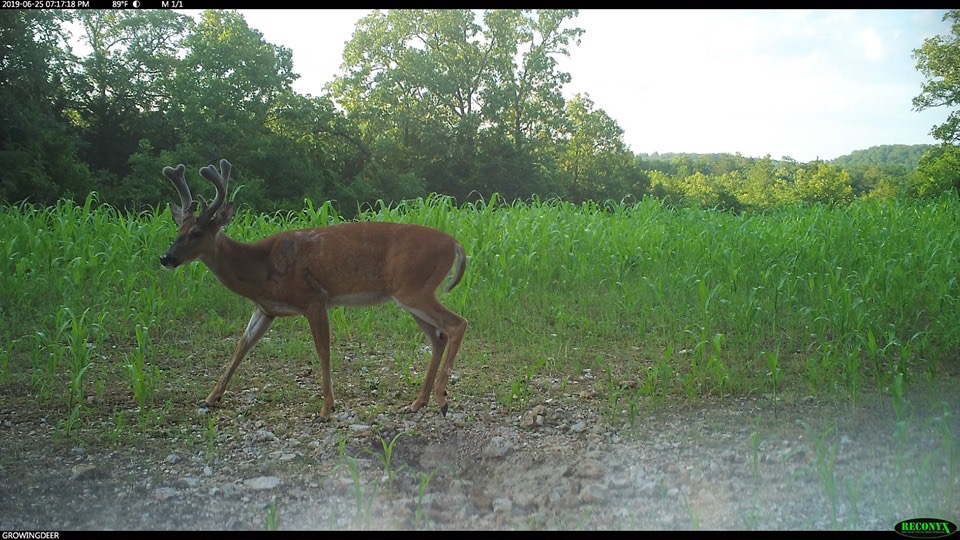 I’ve already started scouting where to put some stands and blinds. This may seem early to some deer hunters. However, scouting now can lead to tagging a buck during the early season. 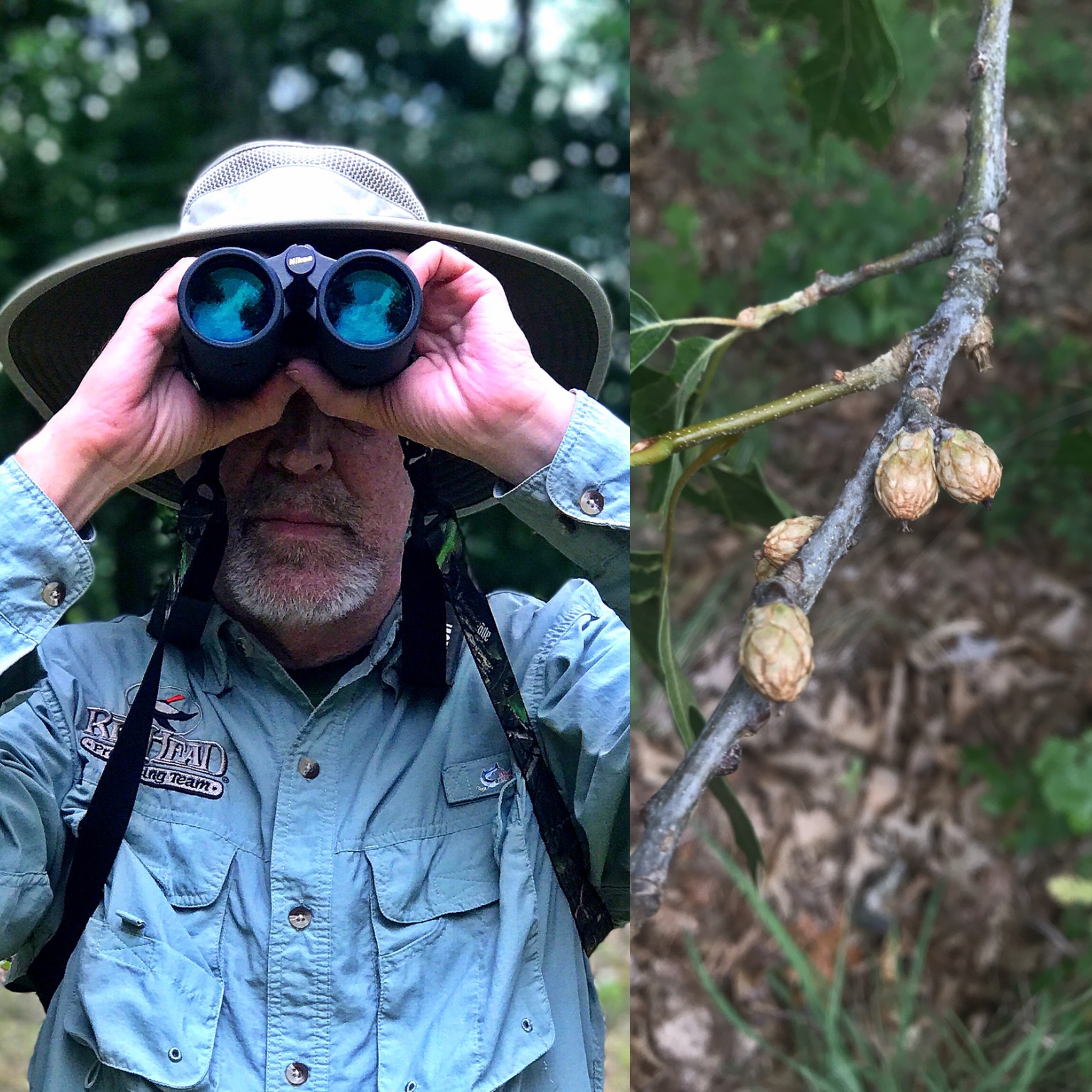 It’s been a wet year and there wasn’t a late frost at The Proving Grounds. These conditions often result in large acorn crops. Based on a bit of scouting, I’ve noticed an abundant crop of red oak acorns and a medium to large crop of white oak acorns.

The trees I’ve scouted were on the edge of food plots, roads, etc. It’s much easier to scout for acorn production in these locations this time of year as they will offer a view of at least one side that isn’t blocked by leaves of another tree.

Many species of acorns are greenish colored this time of year. It can be tough to see green acorns when looking up into a green canopy. The shapes or outlines of acorns can be spotted more easily when looking into the side of a tree’s canopy. Closer to when the acorns are ripe, they turn brown and are much easier to see when looking from below.

Trees with less competition often produce acorns more frequently and more acorns than trees surrounded by competition.  In addition, acorns produced by open grown trees are often larger than trees that have a lot of competition.

Another very important factor is that acorns from open grown trees often seem to mature and drop a bit earlier than oaks growing where there’s a lot of competition. This is very important information. Where the first acorns drop is often an extremely hot spot for deer!

Most species of acorns are high energy and deer crave energy-rich foods during early fall. If there are lots of oaks producing acorns in the area, it’s much easier to find and pattern deer before acorns are present throughout the timber. Spending time now scouting oaks that are likely to drop acorns first can lead to tagging a good buck during the early season!

We leave our Reconyx trail cameras out year around. This allows us to learn much more than deer travel patterns and current antler size. For example, one of our cameras recently took these photos in sequence. The camera that took these photos was located on the downhill side of a bedding area. Even during the summer, thermals carry scent downhill as the evening air cools. 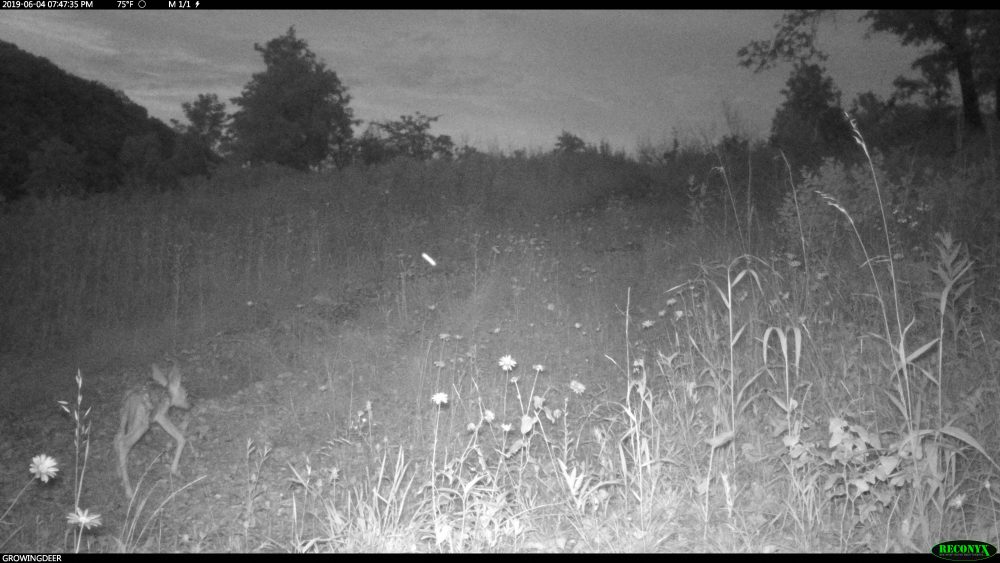 Based on these pictures, it seems likely that this fawn bedded toward the bottom of the bedding area and not far from the interior road’s edge. Just a few hours later there is a coyote and a doe (possibly the fawn’s mother) in the same area. We don’t know exactly what happened but this is a strong reminder of how predators hunt. They often cruise the downhill side of area where prey will be at that time of day. Coyotes are well documented as extremely effective fawn predators. This is why we trap yearly to help balance the number to predators with prey species and work hard to provide quality fawning and nesting habitat. (The Reconyx trail cameras picked up a video of this fawn.  You may watch it HERE.) 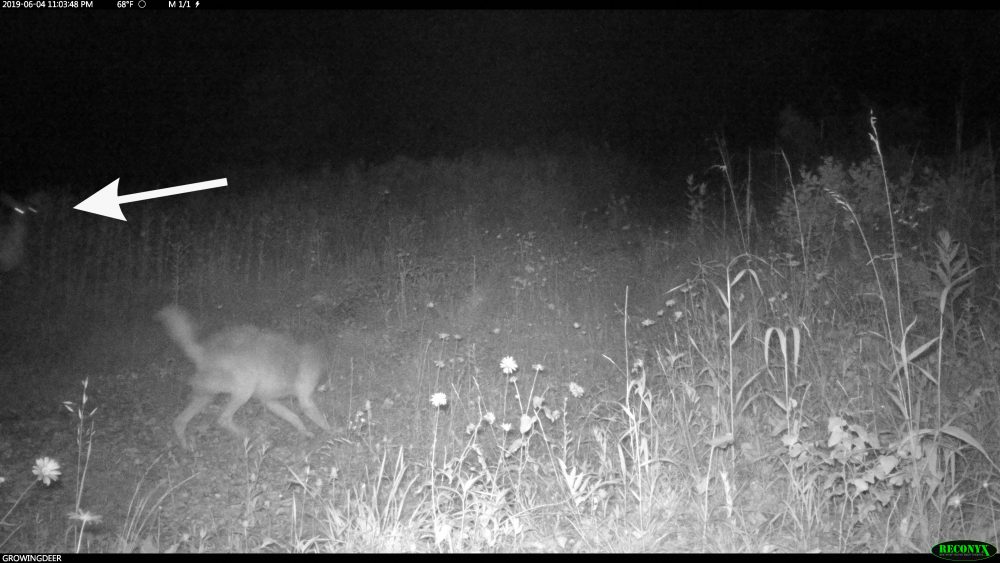 Two-legged hunters can learn from this series of images. We need to approach, hunt, and exit from the downwind side of where deer are likely to be while we are hunting. Using trail cameras throughout the year and moving them frequently is a great way to find stand/blind locations and learn from the best predators!

We recently put up a Hot Zone Deer exclosure.  This is a solar-powered two-layer electric fence that excludes deer from quality forage.  We put this fence in a food plot we call Second House to exclude deer from browsing on some recently planted Eagle Seed forage soybeans.

Some folks ask why I would plant a food plot and then keep deer from feeding on a portion of it.  The answer is simple.  This technique creates great hunting opportunities.  Deer are often very comfortable feeding in a small-sized plot.  If the forage planted in the plot is very palatable to deer, they can limit its production or even consume all the forage before hunting season. 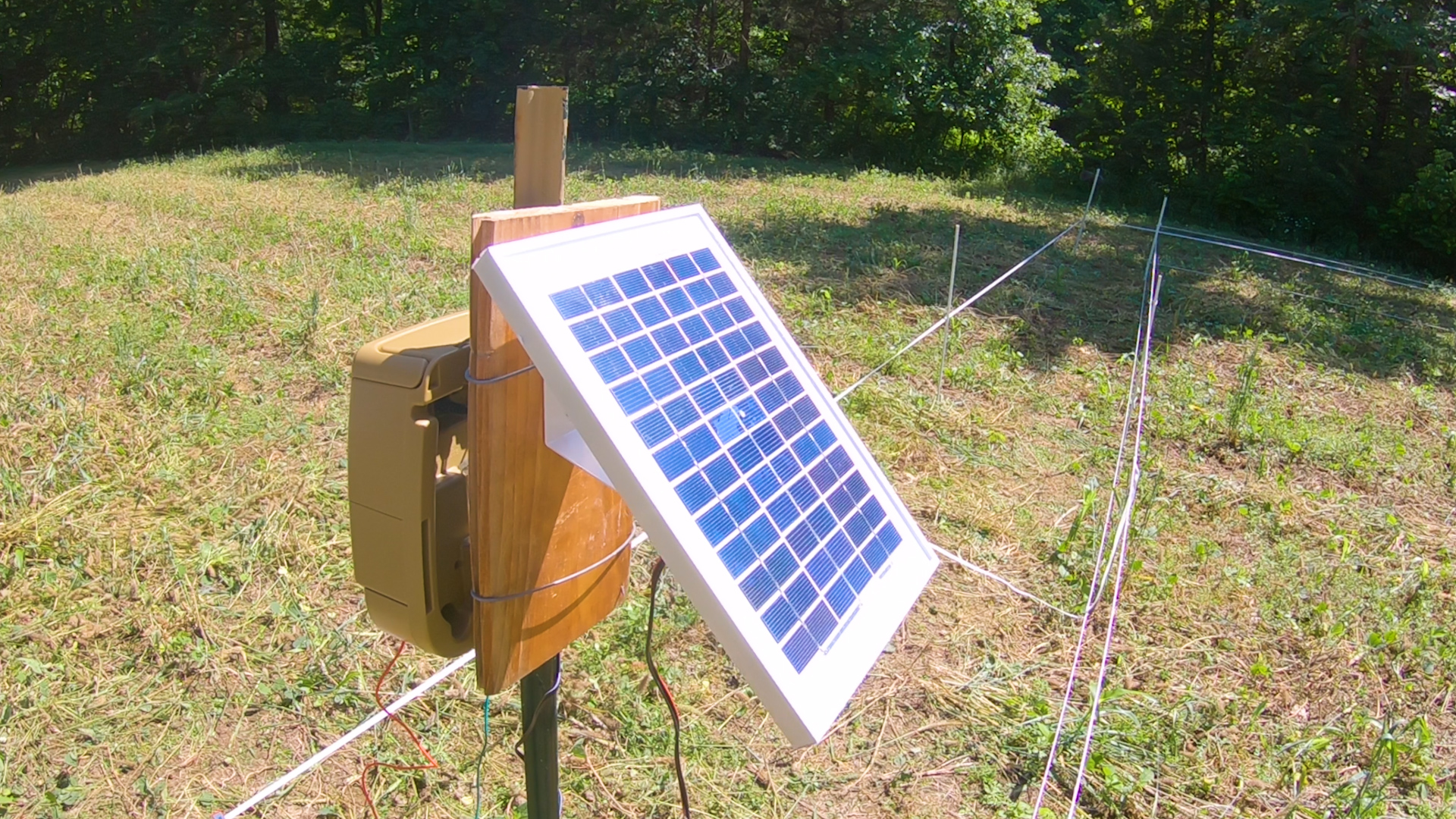 Protecting some or all of the forage in the plot from deer browse until I wish to hunt that area is a great way to create a bottleneck and stand or blind location.

I’ve used this technique for years and am always impressed with the difference in the quantity of food where it’s been protected versus outside the Hot Zone where deer have browsed.

This technique works on 5 or 5,000 acres and is an easy way to pattern deer for trail cameras and/or hunting!  To see details on how to protect your own food plots check out this recent episode.