Being a summer intern at The Proving Grounds requires a really tough and determined student. Why? Because working in these Ozark hills is physically challenging: hot days, ticks, snakes, chiggers and steep, rocky slopes. We let every applicant for the internships know about these tough working conditions as well as our expectations that they maintain good character. Summer interns have a normal work week of Monday through Thursday from 7:00 a.m. to 6:00 p.m. Because of this, the students that come here to volunteer their time are made of the “right stuff.”

This summer, we have been blessed to spend time in the field (and after work hours) with three young men that are passionate about deer hunting, fishing, and the outdoors. You’ve seen them appear in recent episodes of GrowingDeer. Here is a little more background info to go with the faces: 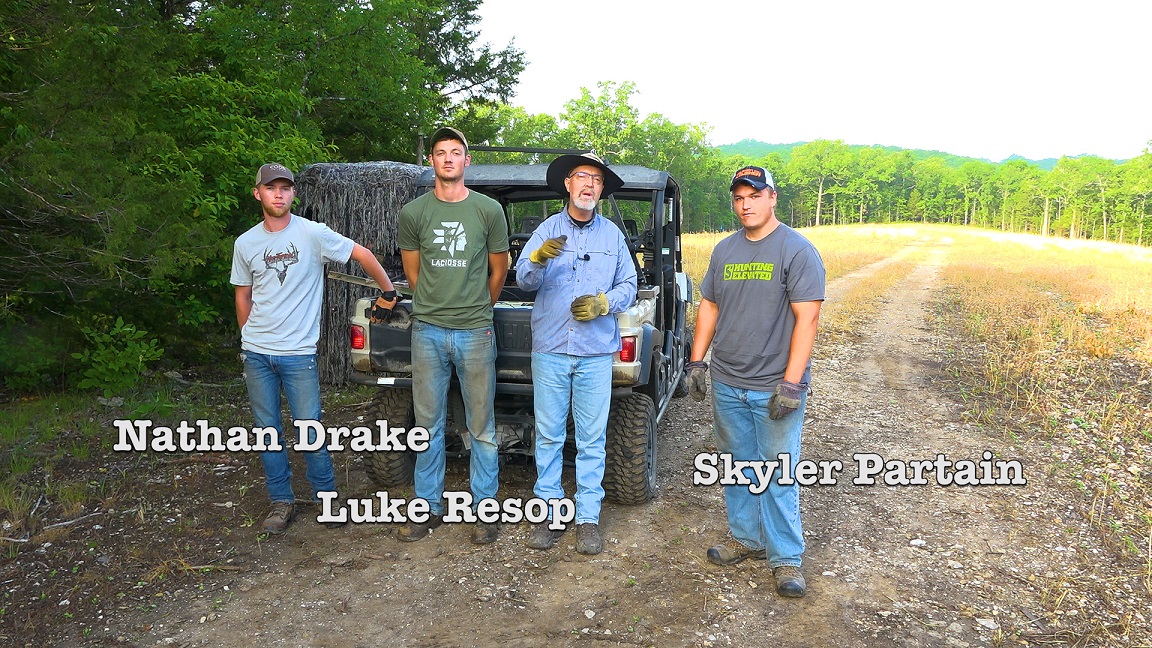 Nathan Drake attends Abraham Baldwin Agricultural College, Stafford School of Business in Tifton, Georgia. He expects to graduate in May 2019 with a degree in business. His Christian faith and love for the outdoors is the driving factor behind his internship with GrowingDeer. Nathan is studying business but loves to hunt. He killed his first deer when he was 15 years old. Nathan primarily bow hunts now. He shared that one of his favorite hunts occurred this past year when he shot a doe at 45 yards. The shot placement was great plus he had the satisfaction of the hunt occurring on a property he has helped manage. Nathan is interested in possible careers in organic farming and hydroponics.

Luke Resop attends Virginia Tech in Blacksburg, VA. He will graduate December 2019 with a degree in wildlife conservation. He has undertaken habitat restoration and improvement for the wildlife populations on the properties he hunts. Those improvements have increased the antler size and doe weights significantly. He’s now become very selective in the deer he harvests. He enjoys being in the stand, watching the deer and the challenge of field judging combined with the restraint necessary for bow hunting. His career goal is to be a whitetail biologist with a state agency or in the private sector.

Skyler Partain attends College of the Ozarks in Point Lookout, MO. He will graduate May 2019 with a Bachelor of Science in conservation and wildlife management and a minor in ag business. Skyler enjoys deer hunting and sharing the experience with friends and family. His first deer was taken when he was hunting with his grandfather. He remembers that hunt well not only because it was his first deer but also because in those final moments before the shot his grandfather accidentally dropped his coffee thermos from the stand. Instead of running off, the buck that was in front of them “froze” and Skyler was able to make the shot. His career goal is to work either as a private lands biologist with a state/federal agency or something related to habitat management for wildlife.

After the long hot days here on the property, you’ll most often find these guys out kayaking and fishing the nearby lakes. They are living the dream – much like Luke Bryan sings about: “huntin’, fishin’ and lovin’ every day…”.

We hope that you find some time to sit “high on a hill looking at a field*” and enjoy some time with the Creator.

*This verse of the Luke Bryan song has the field downwind but Grant and the team prefer to have the wind in their face (upwind) to watch the deer in the field while sitting on that hill or in the stand! No matter which way the wind blows, we’re lovin’ the days and lovin’ the Creator!