Just a couple of weeks ago while hunting, I saw a four-year-old buck we call HighRiser and a younger buck enter a food plot about 100+ yards from my stand. It was near the end of shooting light so I took out my Messenger grunt call and grunted to see if HighRiser would come on in for a shot before dark. HighRiser looked my way after the first call. I called again and he took a few steps my way. I called more aggressively and HighRiser started towards the stand. The more I called, it was easy to see from HighRiser’s behavior and posture he was becoming aggressive.  Both HighRiser and the younger buck came within range but a tree canopy blocked my shot. It was a very fun hunt! (You can see that hunt by clicking here.)

It’s because of responses like this that the Messenger grunt call is one of my favorite tools for deer hunting. During the early season I set it to the highest pitched setting.  Both bucks and does will often respond to this pitch.  I only call during this time of year when I see deer that do not appear to be coming within range.  In addition, I start with a very low volume and work up till the deer indicate they’ve heard the call. I rarely call after they’ve responded with a look, etc. Using this strategy, I’ve watched groups of does and fawns respond as well as bucks.

As scrapes heat up and at the beginning of the pre-rut I switch my Messenger to the middle setting and use it a bit more aggressively.  I don’t call to does as much at this time of year as they can be leery of bucks that are pestering them.  I do call to bucks – often more than once.  I will grunt lightly multiple times after the buck or bucks have shown signs of hearing the call.  If the buck is coming my way I don’t call. If he stops, I will call again just loud enough for him to hear the call.  Watching the behavior and posture of the buck determines how much more I use my call. 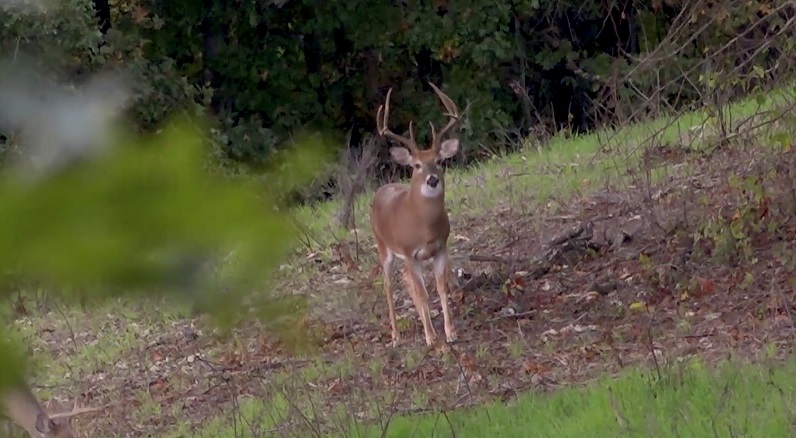 Once the pre-rut is in full swing I use the call very aggressively. I’ll even blind call (call without seeing a buck).  The one time I don’t call is when I see a mature buck tending a doe.  The doe will often go the other way and the buck will follow.   It’s as if she’s being pestered by one buck and doesn’t want to be around another to add to her troubles.

Once most does are receptive and the rut (breeding) is in full swing, I will grunt at any buck I see cruising UNLESS they appear to be coming within range. I’ve seen buck’s respond from long distances.  I blind call about every 15 to 30 minutes to pull in those bucks that might be in the vicinity of the sound but outside my range of vision

Using the middle setting on a Messenger grunt call communicates that a young buck is tending a doe possibly causing other young bucks and mature bucks to respond. Don’t over call, but a single grunt or two when blind calling will let bucks within hearing range know there’s a receptive doe nearby and they will usually come check it out.

Be careful to not call to bucks that will likely approach from the downwind side.  Such bucks may bust you before they get within range.  This is true throughout the season.  This means the timing of when to call depends where the buck will likely approach. I’ve let bucks travel past me so they wouldn’t swing downwind when responding.

I use this same strategy throughout the rest of the season.  I tend to to call more often as the season progresses. However, even a month or more after the peak of breeding bucks will still respond to grunts which indicate a receptive doe is in the area.

The third setting replicates the sound of a mature buck.  I only use this if I see a mature buck and he won’t respond to the middle setting.  When a mature buck responds to this call, be ready. He’s likely committed to coming in close!

Check out our clips page for Reconyx trail cam videos of bucks grunting and practice to mimic their sounds. You can start with the video here where a young buck grunts while chasing a doe.

I’ve tagged many bucks and does due to calling. It’s a very exciting and effective way to hunt! I hope these grunt calling strategies work for you, too.  For more tips, watch the video at this link.