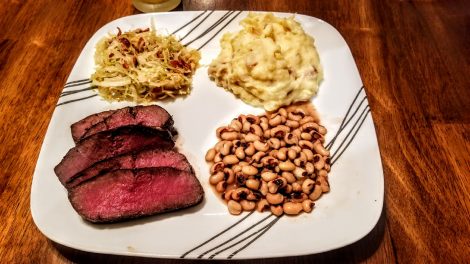 Note on cooking method: Sous vide is a French term meaning “under vacuum”. The meat is cooked in a vacuum sealed bag using a temperature controlled water bath, then seared either on the grill or in a skillet. The beauty of this method is the ability to control the final temperature of the meat and evenly cook the meat all the way through. Cooking sous vide is commonplace at high end restaurants with high dollar equipment. However, it can be done at home with a simple cooler, some hot water and a remote thermometer.

This recipe is compliments of Brandon Pittman, a GrowingDeer Pro Staffer.

Warning: This post contains information about sous vide cooking. The USDA recommends cooking raw meat to an internal temperature of at least 145 F as measured with a food thermometer before removing meat from the heat source AND allowing meat to rest for at least three minutes before consuming.