About seven days ago I noticed a mature white oak tree at The Proving Grounds with leaves that were brown, curled and appeared to be dying.  This was a very unusual observation for late May.  The oddity of the observation and the fact that it was a white oak made me a bit sad.  The timber on The Proving Grounds was grossly mismanaged before I purchased the property and as a result there are very few mature white oaks.  However, I know that trees age, get sick, are struck by lightning, etc., and die.

I was very suspect when I returned to that portion of the property a day later and noticed another mature white oak tree in the same area with brown leaves.  In less than a week, all leaves had fallen from the original tree and several more white oaks on the same hillside had brown leaves.

I prefer that deer at The Proving Grounds consume better quality food than acorns, but these trees were stately and very attractive.  There are no food plots on this hillside and it hadn’t been burned in two years.  Realizing I needed help diagnosing the problem I called a friend, Randall Roy with the Missouri Department of Conservation.  Randall manages several thousand acres of public land about an hour east of The Proving Grounds.  He called a forester at the Missouri Department of Conservation that stated his “phone had been ringing constantly this morning.”  To their credit, the Department had already mobilized some experts to identify the cause of this phenomenon that had been reported over a several hundred mile area.  Jumping oak gall is the early diagnosis. 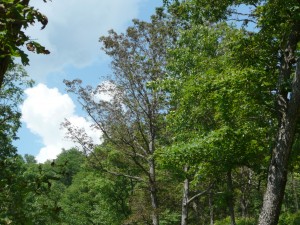 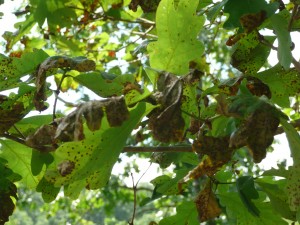 Jumping oak galls are produced by gall wasps. According to Johnson and Lyon (Insects That Feed on Trees and Shrubs, 1991, page 440), as the larva inside of a gall matures, the gall falls to the ground.  The gall then “jumps” repeatedly a few centimeters because of the activity of the insect inside.  I researched jumping oak gall and learned that most trees that have jumping oak gall survive.  I hope the authors are correct.  It’s tough to see beautiful trees become totally defoliated during prime growing season.

It seems I’m constantly being taught new lessons.  I’ve driven by this grove of mature white oaks hundreds of time during the past eight years.  I thought frequently about hunting in or near them.  A professional photographer friend of mine, Michael Engelmeyer, has taken multiple print ad and magazine cover images near these trees.  I’ve watched turkeys fly up and down from them.  I used prescribed fire to manage around them.  It never crossed my mind that I might out live them.  I hope I learn to not take natural beautiful spots for granted, even though I work outdoors constantly.  I hope they survive.