This time of year I always hear a lot of talk about the “late rut.” It’s often used in discussions about hunting strategies and stand placement.

Throughout most of the whitetail’s range, most does become receptive during early November. This is based on literally 10’s of 1,000’s of fetuses removed from harvested does and aged to determine their conception dates. With years of these data it’s clear that moon phase, weather, etc., doesn’t impact when deer breed. The only significant change in breeding dates for specific herds/properties that I’ve documented (or heard about) were caused by hunters purposely altering the herd’s adult sex ratio. They changed the herd’s adult sex ratio by harvesting more does and passing young bucks on properties where the deer harvest had been predominately bucks for years. I’ve documented a shift in the average breeding date of more than 30 days as a response to a few years of working to balance the adult sex ratio. As a result of these efforts the hunting also improved substantially as more mature bucks were competing for does. The bucks responded to rattling, grunt calls, decoys, etc. 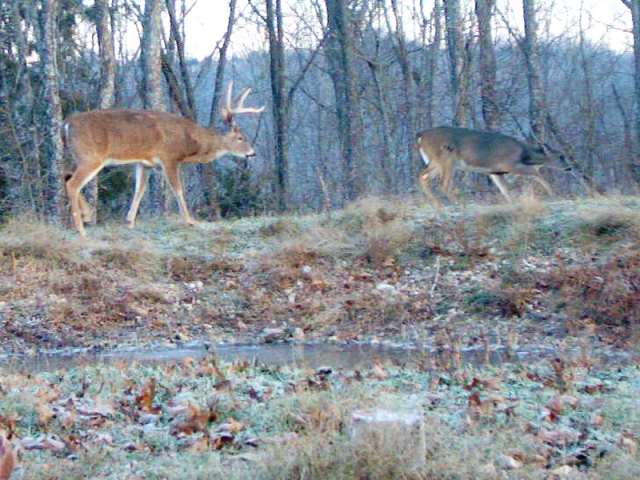 The more balanced the adult sex ratio, the shorter and more intense the rut will be.

The more balanced the adult sex ratio, the shorter and more intense the rut will be. For example, if the deer harvest in an area where you hunt has been close to being balanced (as many does as bucks) for a few years, then expect a few does to become receptive early, a flurry of breeding activity, and then the breeding activity tapering off. Imagine a bell-shaped curve of breeding activity. The right side of the bell is usually a gentler slope (the breeding activity may tapper off slower than it started) than the left side.

Female fawns usually reach puberty and become receptive if they reach 60-70 pounds during their first fall/early winter. In soybean and corn production regions, areas with high quality native habitat, properties with a substantial amount of quality food plots, etc., many female fawns will become receptive. Depending on the quality of the habitat, this can vary from a very small percentage of the female fawns (usually in areas where timber is the primary land use) to 80+% in areas of Iowa.

In areas where a high percentage of female fawns do reach puberty during their first fall, the amount of bucks seen cruising, chasing, etc., certainly appears like a second rut! This is simply one more reason to manage for a balanced adult sex ratio and high quality habitat. This work not only will allow bucks to produce larger antlers, but create better hunting throughout a longer period of time!

I live on an island of quality deer habitat – literally. I live and hunt where timber and fescue (same as a biological desert) are the primary land use. I’ve worked to improve the habitat and have created quality hunting in a white-tailed deer habitat desert. You can enjoy the “late rut” anywhere, even if you hunt on an island like me. However, those of us that hunt on an island must work a bit harder to enjoy the same quality of hunting as those that hunt in corn and soybean production areas!