It’s early in the 2012 bow season. October 1st Brian and I went to a stand we call Boom North. It hadn’t been hunted this year (or most of last year). Using the Reconyx time lapse feature, we had a pattern of deer entering the food plot by the stand and the wind was predicted to be favorable that afternoon.

I told Tracy (my wife) that I’d be late as I expected to tag a deer that afternoon. Once in the stand, Brian and I noticed the winds were swirling. We’ve come to trust our scent control system as we’ve had some great experiences already this year (GDTV 149).

We’d only been in the stand about 20 minutes when I heard a deer behind us in the forest. Brian and I caught a glimpse of a deer through a hole in the treetops (the ridge slopes down steeply from the stand). It took more than 10 minutes for the first deer to enter the field. Either our scent was going over the deer or our scent control was working perfectly!

The doe held up just behind a limb blocking a clean shot. During the next 10 minutes four more deer entered the plot. None of them offered a broadside shot. Brian and I were in ready posture for 38 minutes before we had the option of a broadside shot. The doe was head down and eating when I drew. She was 31 yards away and seemed relaxed.

When I released the Muddy BloodSport arrow and watched the green Nockturnal nock speeding toward the doe, I had the same feeling as when you shoot a basketball and know you ripped the net long before the ball gets to the goal. Then, in disbelief I watched the doe drop and my arrow just miss the top of her back. All deer scattered and my confidence drained. 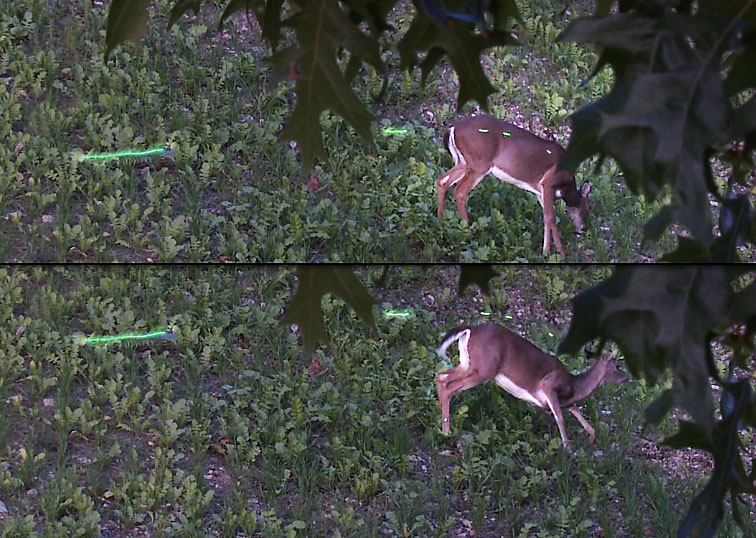 The top shows where the arrow would have been had the doe not dropped. The bottom shows what actually happened.

About ten minutes later one of the does returned to the plot. When she offered a 22 yard broadside shot, I tried again. That resulted in a short drag and tenderloins in the freezer! What was the difference? 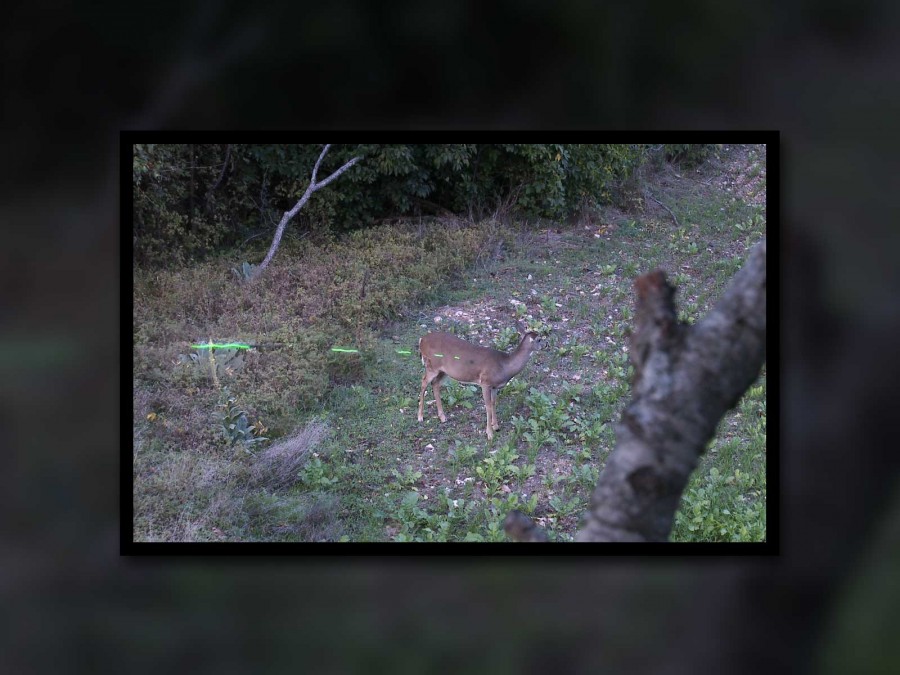 The speed of sound is about 4 times faster than my bow shoots an arrow. Hence, if the deer is alert and reacts to a sound, they typically drop their body to prepare to sprint from the source of the sound. If you watch the video, you will notice the doe didn’t start dropping until the arrow was well under way. After being within 40 yards of two hunters for more than 30 minutes the doe was alerted by our presence. I’m amazed she hadn’t busted us earlier given the swirling winds. Once again the scent control system we use seems to be working!

The first doe apparently was alert enough to react to the sound of my bow and obviously had ample time to react and dodge the fate of becoming tenderloin for the Woods family. This was a great reminder to not shoot at deer that seem alert with a bow.  Unless you are shooting the fastest bow on earth (1,100+ feet per second) deer can dodge the arrow – or worse yet, cause the arrow to hit a non-vital zone.

Tracy wants more tenderloin for the freezer, so I’ll be back in a tree soon – making sure to not shoot at deer that are alert.