Recently we saw a great example of the difficulty of hunting where there are strong thermals.  There are several great thermal lessons in this 1 minute video (this video has been sped up x5) along with a still image below showing the fog floating. 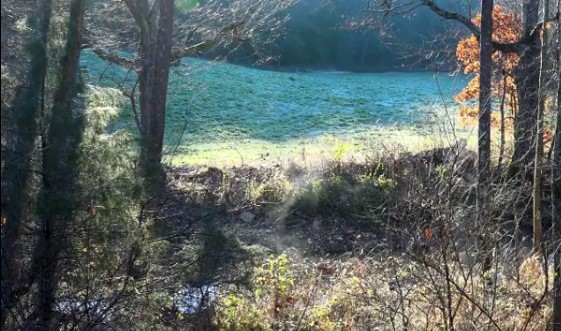 1. Cool air is heavier than warm air and sinks to the lowest point. The creek shown here is the lowest point. That morning, cool air was falling down the mountain and sucked downstream -north to south (left to right). The wind that morning was almost nonexistent but forecasted from the south. Because the wind was low, thermals were able to dominate the direction of air movement. In this case, air was moving opposite the forecasted wind direction.

2. Air was pulled down the creek because it was cool. However, something else happened. The sun began warming air, making it lighter. As the air was pulled downstream it also began to rise.

3. As the sun continued to warm the air, the air shifted and was pulled upstream several times. This is a great example of what happens when cool and warm air mix. The air churns and its path is not predicable- moving up and down, back and forth.

Hunters can apply these observations and lessons when hunting. Understanding how cool air sinks, warm air rises, and how thermals churn/mix when both cool and warm air collide can help hunters better understand where and how scent is carried.