I just took a 4 point by bow that had a growth hanging under his chin. 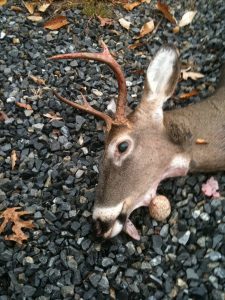 I could see the growth swinging under his chin like a ball on a string as he made his way to my stand.  The growth is about twice the size of a golf ball and hard.  It is hanging from a small section of stretched skin.  He was definitely too young to be taken, but due to the deformity I took the shot.  I was concerned with it being infectious to our other deer.  After researching this I believe it is a viral wart and is infectious to other deer but not humans.  The meat is reportedly still okay unless infection has set in.  Should these deer be harvested to protect the herd, is the meat safe and is there any worry of human infection?

That is an odd growth shown in the picture!  I can’t positively determine what the cause of the growth was.  However, such oddities do occur in deer (and other species of wildlife).  Usually, unless there is a secondary infection such growths do not contaminant the meat that would normally be consumed by humans.  If you have any doubts, most states allow their game wardens to issue a replacement tag if requested by the hunter.  I wouldn’t worry about the growth causing damage to other deer, unless the deer was in captivity and in constant contact with other deer.